A Look into the Mind of Gen. James Mattis:  15 Quotes from Trump’s Secretary of Defense Pick 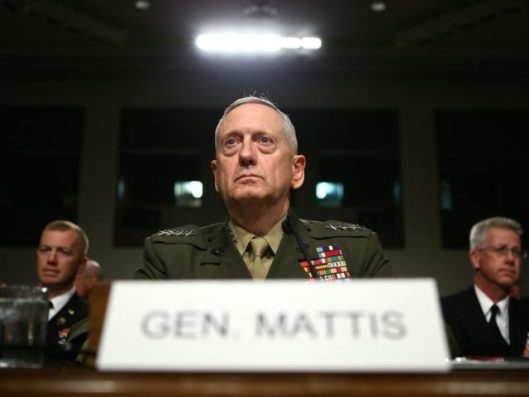 Retired Marine Corps General James Mattis is President-elect Donald Trump’s choice for Secretary of Defense, and he is one of the most quotable figures in modern public life.

He rarely gives a speech without saying something that should be emblazoned on coffee mugs, or in some cases stenciled on the side of bombs.  Here are some of his greatest hits: 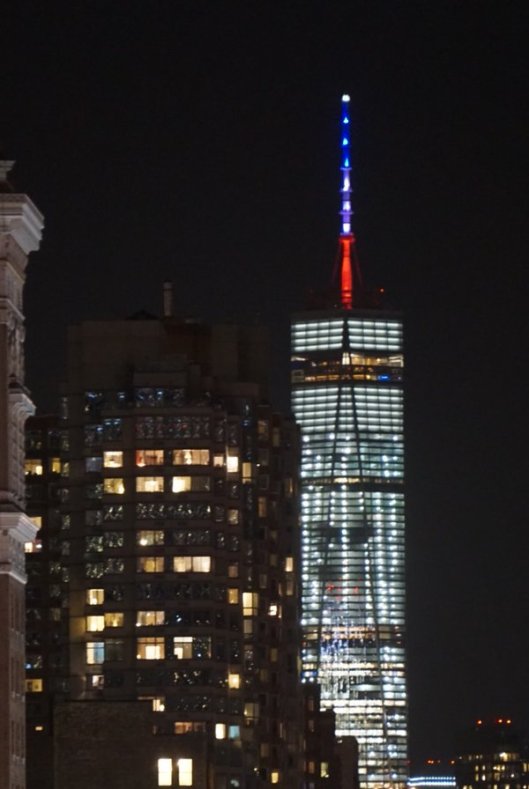 One World Trade Center, right now, in the colors of the French Flag

The following are two articles elaborating on the anti-war elements of “American Sniper.”  –SB

Some critics have lambasted Clint Eastwood’s “American Sniper” for purportedly glorifying war, but the famed movie director recently revealed what he believes to be the “biggest anti-war statement” that can be found embedded in the record-breaking film.

“The biggest anti-war statement is what [war] does to the families left behind,” Eastwood said at Saturday’s Producers Guild Awards nominees breakfast, according to Variety.

Similarly, Yahoo! News quoted the “American Sniper” director as saying that the “biggest anti-war statement any film” can offer up is the “fact of what [war] does to the family and the people who have to go back into civilian life like Chris Kyle did.”

In making the film, which tells the story of famed Navy SEAL Chris Kyle, Eastwood said that meeting the late military hero’s family members was important to the process for both him and actor Bradley Cooper, who portrayed Kyle on screen.  [ For movie trailer, see: http://www.theblaze.com/stories/2015/01/26/clint-eastwood-reveals-biggest-anti-war-statement-that-can-be-found-in-american-sniper/ ] 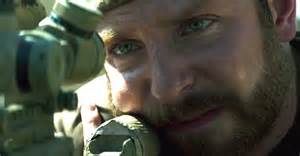 So, the two went to Texas to meet Kyle’s wife, children and extended family members before filming “American Sniper.”

“I thought I’d better meet the rest of the family and see what they looked like and that would probably dictate the casting and to see what Mrs. Kyle was like,” Eastwood said.  “I went down there and met the mother and father and their grandkids.  It was of great value to [Bradley] because he could get into the history of the family and their feelings about the whole situation.  It was a very pleasant experience from beginning to end.”

Screenwriter Jason Hall made similar comments earlier this month when he told Variety’s “PopPolitics” that the lives of Kyle and his fellow soldiers, as depicted in the film, counter any images that might be seen as glorifying war.

Hall added that he personally didn’t entirely understand the Iraq War, but that he believes in supporting the troops once battle begins.  The screen writer added that “soldiers don’t choose their war; war chooses them or their politicians choose the war.”

Listen to Hall make these comments below:  [ For audio recording, see:  http://www.theblaze.com/stories/2015/01/26/clint-eastwood-reveals-biggest-anti-war-statement-that-can-be-found-in-american-sniper/ ]

Emotions surrounding “American Sniper” — from support for the film to claims that it inaccurately portrays Kyle and the Iraq War — are complex and diverse, with some like filmmaker Michael Moore responding by issuing attacks.

“Instead of being a sniper to protect our troops, I tried to save their lives by stopping Bush from sending them to their deaths in Iraq,” Moore tweeted over the weekend.

Jason Hall, the screenwriter of “American Sniper,” says that while the movie features harrowing scenes of combat, he also set out to convey the toll of the Iraq War on its central figure, Chris Kyle, the Navy SEAL considered to be the most lethal sniper of the modern American military.

While there has been some criticism that the movie glorifies some of the deadly battles as the U.S. fought insurgents during its occupation of Iraq, Hall, in an interview with Variety‘s “PopPolitics” on SiriusXM this week, says that it’s countered by the movie’s focus on the personal life of Kyle and other fellow soldiers.

Hall said that he initially “didn’t totally understand” the war in Iraq, but coming from a family with a military background, he understood that, once U.S. military action began there, it was important to support the soldiers.  “I’m very aware those soldiers don’t choose their war; war chooses them,” he said.

Director Clint Eastwood has said that he was opposed to the U.S. invasion of Iraq, which may be a surprise given his history of support for Republican candidates (and appearance at the 2012 GOP convention).

Hall, meanwhile, says that “American Sniper” may generate different reactions from different moviegoers, as well as provoke debate over the American experience in Iraq.  He says the movie is “a new perspective of a war we are still trying to understand,” because of its focus on the soldiers.

In developing the script, the first challenge Hall had was gaining Kyle’s trust.  Their first meeting wasn’t going so well until Hall took an unusual action:  He put one of Kyle’s friends in a headlock.

Hall describes his final contact with Kyle in 2013, just as he was turning in the first draft of the screenplay.  The next day, Kyle was murdered at a Texas shooting range by a veteran he was trying to help.

“PopPolitics,” hosted by Ted Johnson, airs on SiriusXM’s POTUS Channel on Thursdays at 11 a.m. PT and Fridays at 3 p.m. PT, as well as on demand. 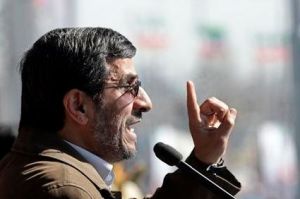 SALUTATIONS to the Lord God of Hosts, the Father Almighty, Creator of Heaven and worlds and suns, . . . the Perpetrator of men — and my Father.

I wish to assure you, my Father, that it has given me no unsurpassed pleasure that Melina, one of the sons of Arcturus, has now become a wasteland, devoid of the curse of human life, and moves about his parent sun in glorious silence, except for the winds which blow from pole to pole.  Nothing sentient survives.  The seas move in and out unseen by human or animal eye.  I regret the innocent animals, but am I guilty of the men of Melina?  No, it was Your Majesty who created them, despite my warnings — as I warned You from the beginning of time.

This morning, . . . I meditated on the blessed silences where men are not. . . . I knew that within these waters lived no fish or serpent any longer, no sinless fin, no wild and uncorrupted eye.  That was my sadness, my only sadness.  Did I destroy Melina, and leave her mighty white cities uninhabited, her tangle of vast roads pale only with dust? . . . I am guiltless of this.  I do not force men; I suggest and tempt.  It is their will that they obey me, that they offer me their deepest adoration and most passionate allegiance, and that they turn, always, from You.  I do not exploit their wickedness; they choose it for themselves.  I merely give them the opportunity to pursue evil to its ultimate.  The horizons of Melina are now without meaning, for Death has no meaning, as You, my Father, and I know only too well.  You have said it often, in all Your worlds, in the tongues of all creation — but men do not believe You.  They believe only me.

. . . What has virtue to offer in comparison, though virtue is eternal life?  Does virtue possess the drama, the violence, the color, the frantic vehemence, the terrible euphoria, the laughter and noise and ecstasies of evil, and yes, the enormous capacity for destruction?  Verily, it does not.  It is a weariness to man, as You have regretfully observed ten thousand times ten thousand millennia over and over.  The desire for wickedness and death is far greater in the breasts of mankind than the desire for innocence and life.

Eight billion souls from Melina now occupy my domain, and I loathe them, . . . To You, my Father, there rose only six thousand souls who had resisted me.  A poor harvest!  You are the Sower, but I am inevitably the Reaper, and so shall it be throughout eternity.  You are the Vineyard, but it is I who harvest and press the grapes and drink the wine.  You are the Tree, but I garner the fruit.  You are the Meadow, but the grain fills my granaries.  Do you consider that I rejoice in this?  I do, only to the extent that I can prove that Your Majesty was wrong from the beginning.  It is no joy to me to wound You, Who have so many wounds, and Who shall receive so many countless more. . . . If I had tears to shed I would shed them for my Father, Who loved me, Who called me His son and His Star of the Morning.  It was You Who mourned me and exclaimed, “How have you fallen!”  But I have not fallen lower than man.  That would be impossible.

I have been called the patron saint of scientists.  Yet, . . . I merely conducted a dialogue with them, as a teacher, a suggester.  It was theirs to recoil, to reject with terror and loathing.  It was in their hands to destroy the formulae, in horror.  But alas, they hated their brothers with so much infernal passion!  It is true that I am the father of wars, the songster of hatred, but again, it is in the power of men to reject, for do they not possess free will, that frightful gift you bestowed on men and angels so long ago?  But though I am the father of wars, I do not precipitate them.  There is no need for my own energies to be involved in this matter of fraternal detestation, nor do I need to stimulate it.  It is in the nature of man to hate his brother; he needs little encouragement.

. . . They did not think:  “How will this benefit my race?”  They only thought:  “How can this be used to eliminate my enemies?”  For man, as Your Majesty knows, cannot live unless he creates his own enemies.  He finds existence dull beyond imagining if he has no foes.  His pursuit from birth is not goodness and mercy and love.  It is only destruction.  It is his nature.

. . . Still, I am guiltless.  They could, until the final awful moment, have withdrawn from their decision.  I used no force.  They were no slaves.  They were free.  They chose to die.  Certainly, it was not their plan to vaporize themselves together with their “foes.”  But evil is madness and has no pity, and therefore it is confusion thrice compounded.  Evil men possess no wits.  They are easily led to believe what they wish to believe, and the men . . . believed that they would suffer no consequences from the murder of their brothers, and that the cities and the treasures of their fellows would survive.

. . . their children and their children’s children cried — as they cry always — “It is only a myth!  It did not occur! . . . It is only a vision of what is Not Possible, for there is only reality, and man is reality, and what is seen and felt and smelled and tasted and heard with our senses is the only objectivity, and only truth.  We are too Advanced for myths; we have achieved maturity and wisdom and intellect.  Begone with Myths!  They are the lumber of dead yesterdays, the rubble of a primitive people, the legends of our racial childhood.  There is only Today, and we are that Day.  There is but one God, and His Name is Mankind, and science is His prophet.”

Shall You raise up another race?