http://www.wsj.com/articles/the-20-who-spread-most-disease-1418686476
Your Health
The 20% Who Spread Most Disease
Why Some People Are More Contagious Than Others

[See:  http://www.wsj.com/articles/the-20-who-spread-most-disease-1418686476 for film clip]  Twenty percent of the population is responsible for the transmission of 80% of infectious diseases.  WSJ’s Sumathi Reddy discusses “superspreaders” with Tanya Rivero.  Photo:  Getty

Known as superspreaders, they amount to roughly 20% of the population, but they account for transmission of about 80% of certain infectious diseases, scientists estimate.  The phenomenon has been observed, among other contagions, during the global SARS outbreak in 2002 and 2003 and as far back as Typhoid Mary, a cook in New York who infected dozens of people with typhoid fever in the early 1900s without falling ill herself.

Now, scientists are working to find the reasons why some people spread disease more than others.  Of course, circumstances play a role, such as a crowded day-care center, and some pathogens are naturally more virulent than others.  Recent experiments suggest the body’s immune system at times also may play a role—not just to protect against infection but also to spread more of the pathogens to others.

It isn’t clear which is the bigger contributor to being a superspreader—people’s behavior or their immune-system response.  But some scientists say both factors seem to play a role. 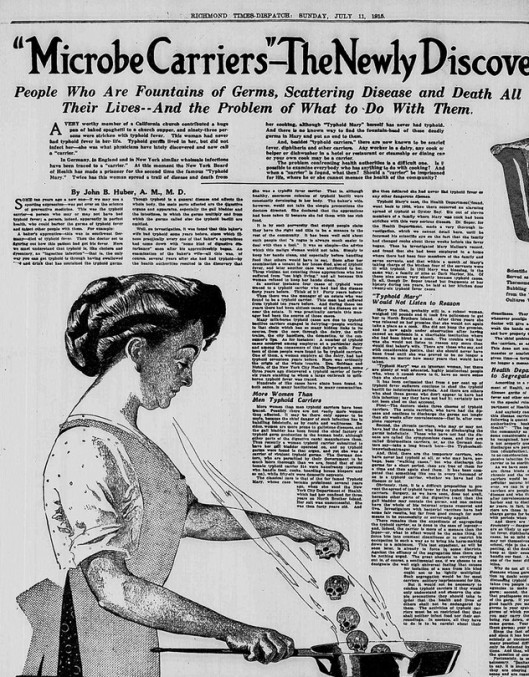 A 1915 page from the Richmond Times-Dispatch featured an article about Typhoid Mary, a cook who infected dozens of people with typhoid fever without becoming ill herself.  Scientists today say she was a superspreader.  Library of Congress

“This is a phenomenon that’s been observed but nobody really fully understands it,” said Denise Monack, an associate professor in the microbiology and immunology department at Stanford University.  Ultimately, researchers would like to find a way to predict who is a superspreader to help contain the spread of infectious diseases, she said.

So far, research in the field has focused on serious infections, including severe acute respiratory syndrome, or SARS, and tuberculosis, and on bacteria such as salmonella and Staphylococcus aureus that can cause sickness.  It has also been investigated in wildlife in relation to West Nile virus disease and among farm animals with a debilitating virus.  It isn’t known if there are superspreaders for more everyday ailments such as the common cold.

Not everyone agrees on a definition for a superspreader.  Some experts differentiate between supershedders (individuals who emit greater quantities of viruses or bacteria) and superspreaders (those who have more points of contact with others).  Scientists also aren’t clear whether being a superspreader makes it more likely the person will be asymptomatic of the disease, like Typhoid Mary.

One hint the body’s immune system may be involved came during the SARS outbreak, when a disproportionate number of infections in a residential complex were traced to one man in Hong Kong who was on kidney dialysis.  Scientists suspect an association between the man’s weakened immune system and his spreading large amounts of the pathogen.

Shoppers in a Hong Kong store check the quality of surgical masks for sale during a deadly outbreak of SARS in 2003.  Getty Images

“It was suggested that decreased immunity could increase the viral load in certain individuals, and this could make them superspreaders,” said Richard A. Stein, a research scientist at NYU School of Medicine’s department of biochemistry and molecular pharmacology.

Co-infection also may play a role.  Studies have found that infants in nurseries who were infected with the bacterium S. aureus were more likely to spread it after also getting a respiratory virus.  Similar studies have found that adults were 30 to 40 times more likely to spread S. aureus if simultaneously infected with a simple virus, like the common cold, Dr. Stein said.

At Dr. Monack’s lab at Stanford, researchers have been studying groups of mice infected with salmonella that didn’t show signs of illness.  By testing the feces, they found some of the mice shed much more of the pathogen than others.  The differences are large, Dr. Monack said, ranging from 100 million bacteria per gram of feces to just 100 bacteria per gram.  Other studies have documented similarly wide variations in salmonella shedding in humans, she said.

The researchers also found that the immune systems of the superspreader mice are dampened, or less responsive to inflammation.  In a follow-up study, the mice were given antibiotics, which can cause low-level inflammation.  The nonsuperspreader mice had a hyperinflammatory response to the treatment and fell ill.  In contrast, the superspreader mice’s immune systems were able to better tolerate the antibiotic and disturbances in the gut and didn’t result in sickness.  The findings were published in November in the journal Proceedings of the National Academy of Science.

“It’s telling us that these superspreaders…are tolerant of high levels of the pathogen and any little disturbance and added inflammation that this antibiotic treatment did to them,” said Dr. Monack.  “I wouldn’t say they have stronger immune systems.  I would say it’s in a state that protected them from this added disturbance in the gut.”

Dr. Monack said the next step is to run similar tests on the mice with other pathogens and to try to figure out what the immune system’s mechanism of tolerance is.

The research shows the body’s immune system has a variety of possible responses, said Andrew Lee, a senior clinical tutor in public health at the University of Sheffield, in England, who wasn’t involved in the experiments.  “In some people the body doesn’t quite clear the infection but hangs on to it and is able to tolerate the germs.  Whether the response is intentional or just happens to be a quirk of nature, that’s less clear,” he said.

Superspreaders can be a big problem among farm animals.  For example, the virus causing bovine viral diarrhea can infect dairy cows early in life, causing them to shed large amounts of the virus but without showing symptoms themselves.  “They become immunologically tolerant so they don’t become sick,” said Tony Goldberg, a professor of epidemiology at the University of Wisconsin-Madison’s School of Veterinary Medicine.  But other infected cows will produce less milk or suffer reproductive problems, he said.

Dr. Goldberg’s research in Chicago also has found that American robins as a species seem to be superspreaders for West Nile virus, a mosquito-borne disease.  Robins are “able to maintain the viral infection without getting too sick.  And mosquitoes feed on them above what you’d expect from their abundance,” he said.

“Maybe that’s how some of these viruses have survived,” Dr. Goldberg speculated.  “They’ve learned to tweak the immune systems of certain individuals in order to persist and be transmitted.  It’s a very clever strategy if you’re a virus, to hide out in an individual who superspreads you.”