Donna Carol Voss is an author, blogger, speaker, and mom.  A Berkeley grad, a former atheist then pagan, she is now a Mormon on purpose and an original thinker on 21st century living, especially 21st century women.  Her memoir, “One of Everything,” traces the path through one of everything she took to get here.  http://www.donnacarolvoss.com

Propaganda is a derogatory term referring to information, especially of a biased or misleading nature, that is used to promote or publicize a particular political cause or point of view.

Hail to the Chief, anyone?

As I watched President Barack Obama’s press conference in Paris, I found myself thinking back on an undergraduate marketing class I took many (many) moons ago; when the phrase “glittering generalities” floated into my awareness, I realized why! 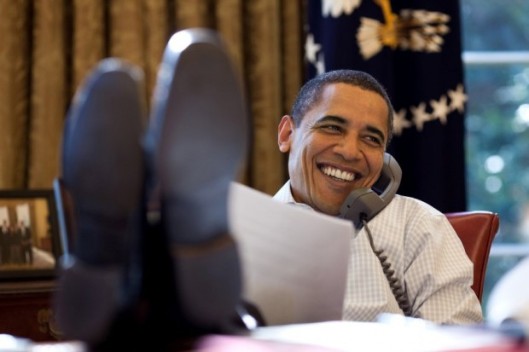 A quick recap of the seven propaganda techniques used by advertisers:  glittering generalities; name calling; testimonial; plain folks; bandwagon; transfer; and card-stacking.  I have taken the liberty of rephrasing them as befits the hawking of a political ideology.

Glittering Generalities:  Nice words to represent the ideology, like goodness or patriotism.

During his press conference, Mr. Obama referred to “human ingenuity” as the triumphant, all-conquering weapon against climate change.  So rigid is his ideology that he caught and corrected himself when he referred to it initially as “American ingenuity.”  The most shining of our American characteristics, more American than apple pie, was thus dimmed and diluted across a global community of “other smart folks.”

Name Calling:  Trash-talking anyone not in lockstep with the ideology for sale.

The American two-party political system is a give-and-take process of persuasion, negotiation, and compromise.  Rather than acknowledging Republicans as worthy Americans with a different ideology, Mr. Obama reduced their challenges to his agenda as “a matter of the games Washington plays.”

Plain Folks:  Appeals to “the folks” that invoke our values.

Reaching out to help others is a core American value, and President Obama well knows it.  His call to address the perils of climate change sooner than at once stoked our sense of responsibility and compassion; we must live our lives today “without condemning the next generation to a planet that is beyond its capacity to repair.”

Bandwagon:  An appeal to be part of the group.

This is where President Obama artlessly bludgeoned us with the “everyone is doing it” of global consensus on climate change.  We were enticed to join “not just the 99.5 percent of scientists and experts but the 99 percent of world leaders” who think climate change “is really important.”  Of course “really important” is code for “Would you look at those knuckle-draggers who think climate change might be a natural cycle!  The idiots actually think a warmer environment can confer some advantage!” (Yes, we would answer.  See quadrupling of Caribou population after the Trans-Alaska oil pipeline was built.)

Transfer:  An appeal that helps us see ourselves as part of the bright, shining progressive ideology on a hill.

In a fleeting acknowledgement that Islamic State might also be “really important,” President Obama opined that “In some ways, [climate change] is akin to the problem of terrorism and ISIL.  In the immediate aftermath of a terrible attack like happened here in Paris, sometimes it’s natural for people to despair.  But … look at Paris!  You can’t tear down Paris because of the demented actions of a handful of individuals.  The beauty, the joy, the life, the culture, the people, the diversity … that’s gonna win out every time.”

Card-stacking:  Manipulating information to make the ideology appear better than it is, often by unfair comparison or omitting facts.

Let me count the ways.

“We went, what, a month, a month and a half where people were pretty sure Ebola was gonna kill us all.  Nobody asks me about it anymore.”

As Mr. Obama clearly demonstrated, if we can stem the outbreak of a potentially lethal virus across a few countries, we can most certainly control the temperature of—and China’s carbon emissions into—our atmosphere.

And my favorite move of all, President Obama invoked the beauty of capitalism and the power of markets to incentivize a cleaner environment.  He then erroneously stated that “the market doesn’t price clean air or clean water on its own” as the rationale for government manipulation of energy production.  (Someone might want to tell Costco there’s no market for the pallets and pallets and pallets of “clean” bottled water they sell.)

Finally and not unique to advertising propaganda, there’s plain old stupidity or lying, take your pick.  When our commander in chief said our U.S.-style brand of mass shooting “just doesn’t happen in other countries,” he was standing a relatively short distance away, as the crow flies, from two now infamous public locations where innocent civilians were gunned down like dogs in the street.  I’m not sure I see the nuance of difference between our mass shootings and theirs.

President Obama’s Superbowl commercial … I mean press conference behind him, he has moved on to the next stop on his ideological tour—the aptly titled “I trust the wisdom of the American people to replace me with a Democrat in 2016.”

Left behind in his wake, we the consumer choose to buy what he’s selling or not.  As for me and my house, I think we’ll pass.

Donna Carol Voss is an author, blogger, speaker, and mom.  A Berkeley grad, a former atheist then pagan, she is now a Mormon on purpose and an original thinker on 21st century living, especially 21st century women.  Her memoir, “One of Everything,” traces the path through one of everything she took to get here.  http://www.donnacarolvoss.com

TheBlaze contributor channel supports an open discourse on a range of views.  The opinions expressed in this channel are solely those of each individual author.