The first American to orbit the Earth brought his religiosity to the U.S. space program—and that made many astronauts bristle 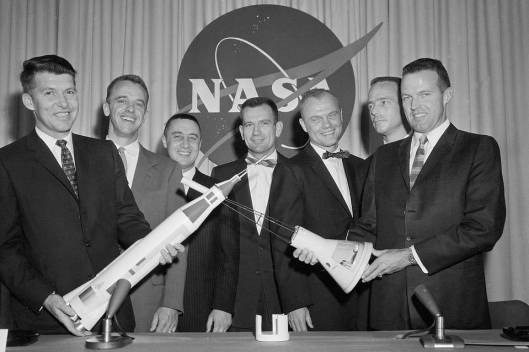 Ready or not, it took how long—20 minutes, maybe?— on Day One, April 9, 1959, for John Glenn to become the role model for every American astronaut of the 20th century.  The problem was, most of them hated the role.

The scene is a press conference convened in the new NASA headquarters in Washington to introduce the first seven astronauts chosen for the U.S. space program.  A mass of reporters and photographers are writhing like weevils among one another to get better angles on the seven men at a table onstage—including, in the middle, Glenn, who died Thursday in Columbus, Ohio, at the age of 95.

The head of NASA gets up and says, “It is my pleasure to introduce to you—and I consider it a very real honor, gentlemen—from your right, Malcolm S. Carpenter, Leroy G. Cooper, John H. Glenn, Virgil I. Grissom, Walter M. Schirra, Alan B. Shepard, Donald K. Slayton…the nation’s Mercury astronauts!”

With that, the press rise to their feet like a single ecstatic animal.  They cheer, scream, clap, shout and weep sublime tears…The press…the press…would they ever stop?

That was the first indication that even the media was succumbing to the single-combat mania that seemed to have died out many centuries ago.  In single combat, two armies confront each other in the battlefield.  But before the all-out battle, each sends out a champion…and the two fight to the death to find out whose side the gods are on.  The most famous tale of single combat is the Old Testament story of David and Goliath.  Little David, the Israelite, slays Goliath, the giant Philistine with a slingshot, and cuts his head off.  The Philistines are so demoralized that they flee, and the Israelites decimate them.

Once the giddy noise dies down, the first reporter to raise his hand wants to know from each of the seven whether or not his wife and children “had anything to say about this.”  The boys begin answering in typical military-officer fashion.  The idea is to answer personal questions as remotely and briefly and in as moribund a deadpan as possible.  That they proceed to do…until it’s John Glenn’s turn.

The others can’t believe it.  The man’s ready with a discourse on the subject, complete with sincerity-steeped rhetorical inflections.

“I don’t think any of us could really go on with something like this if we didn’t have pretty good backing at home, really,” Glenn says.  “My wife’s attitude toward this has been the same as it has been all along through all my flying.  If it is what I want to do, she is behind it, and the kids are too, a hundred percent.”

What the hell is he talking about?  I don’t think any of us could really go on with something like this… Schirra leans into his mike and says, “My wife has agreed that professional opinions are mine, career is mine.”  What possible difference could a wife’s attitude make about an opportunity this big?  What was with this guy?

“I am a Presbyterian,” he says, “a Protestant Presbyterian, and I take my religion very seriously, as a matter of fact.”  He starts telling them about all the Sunday schools he has taught at and the church boards he has served on and all the church work that he and his wife and his children have done.  “I was brought up believing that you are placed on Earth here more or less with sort of a 50-50 proposition, and this is what I still believe.  We are placed here with certain talents and capabilities.  It is up to each of us to use those talents and capabilities as best you can.  If you do that, I think there is a power greater than any of us that will place the opportunities in our way, and if we use our talents properly, we will be living the kind of life we should live.”

A power greater than any of us!  From the lips of a flying jock!  The others do their best to locate some piety and stay in the game.  Gus Grissom says, “I consider myself religious.  I am a Protestant and belong to the Church of Christ.  I am not real active in church, as Mr. Glenn is”—Mister Glenn—“but I consider myself a good Christian still.”  Deke Slayton says, “As far as my religious faith is concerned, I am a Lutheran, and I go to church periodically.”  Alan Shepard says, “I am not a member of any church.  I attend the Christian Science Church regularly.”  He doesn’t feel compelled to mention that when he went to church, it was because his wife was an ardent member.  It was hard slogging, but Glenn had given them no choice.  The wise thing was to imply somehow that you had piety to burn.

Glenn never gave up.  He kept the pressure on.  In his speech to Congress after the historic flight that made him the first American to orbit the Earth, he said some things that nobody else in the world could have gotten away with, even in 1962.  He said, “I still get a lump in my throat when I see the American flag passing by.”

Yet for all of this, I never see mention of Glenn’s importance in the religious history of the United States.  In the late 19th century, Nietzsche uttered his famous dictum “God is dead,” referring to the decline of Christianity among educated, well-to-do people in Europe, and the death throes had spread to America after World War I.  Here, religion limped osteoporotically through the rest of the century, but America remains the most religious country outside of the nations of Islam.  Glenn’s religiosity, amplified by the tremendous, Zeus-like success of the space program—which became his voice—may have slowed down the grim slide.  Where it will all come out, of course, God only knows.

—Mr. Wolfe’s books include “The Right Stuff” and, most recently, “The Kingdom of Speech.”