The following originates from:  http://www.tulsaworld.com/article.aspx/Coburn_calls_on_Oklahomans_to_push_

MUSKOGEE — U.S. Sen. Tom Coburn urged Oklahomans on Wednesday to join the movement for a national constitutional convention to cut down an oversized federal government and counter what he repeatedly referred to as a “lawless” Obama administration.

A national convention called by two-thirds of the state legislatures is one of two ways the U.S. Constitution can be amended.  Such a convention has never been called, largely because the Constitution itself was the product of a convention authorized only to amend the existing Articles of Confederation, but which replaced it entirely.

Thus, political leaders and scholars have long held that such a convention could be dangerous and even destructive to the nation.

But as conservative frustration with the Obama administration has grown, some factions have begun advocating for such a convention.

Coburn’s announcement that he had read what amounts to the national convention movement manifesto, Mark Levin’s “Liberty Amendments,” drew the loudest applause and reaction of the hour-long town hall meeting.

It might also have somewhat cooled the emotions of those in the crowd who were upset because Coburn has been so outspoken in his opposition to a proposal to “defund” the Affordable Care Act by holding the rest of the government’s discretionary spending hostage when current authorization ends on Sept. 30.

“If you’re going to do that, you’d be better off to do it through the debt ceiling,” Coburn said.

Pressed by questioners, Coburn said the proposal championed by conservative special interest groups such as Freedomworks and the Heritage Foundation — and Levin — would be “childish” and “intellectually dishonest.”

Later, Coburn laid out a scenario whereby the Affordable Care Act would be effectively defunded, he said, by ratcheting down the nation’s debt ceiling.

As he has many times in the past, Coburn called Obama “a personal friend of mine,” but that did not prevent him from calling the president’s administration lawless and incompetent and “getting perilously close” to the Constitutional standard for impeachment.

Coburn pointed out that the discretionary spending has fallen each of the past two years by a total of $160 billion, “the first time that has happened since the Korean War,” and said it was an indication that the much-despised sequestration — automatic, across-the-board federal spending cuts — is working.

“Sequestration is a hard way to do things, but it’s better than nothing,” he said, adding that “necessity is the mother of invention.”

A public defender gently challenged Coburn on the issue, saying sequestration was actually costing the federal government because the Justice Department had laid off so many staff attorneys it had to hire private ones at an hourly rate.

“Your agency, Justice, is one of the most wasteful in Washington.  It’s not my fault if the money is not getting to you,”  Coburn said.

“There is no place in the federal government that is not rife with waste.”

Copyright 2013 Tulsa World.  All rights reserved.  This material may not be published, broadcast, rewritten or redistributed. 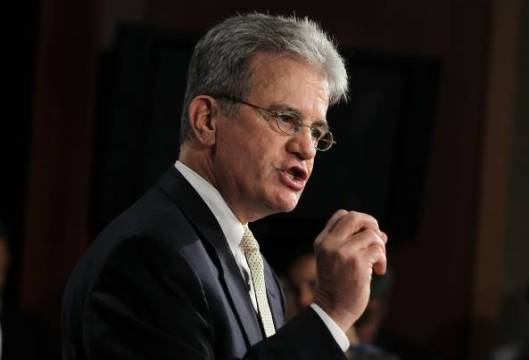 The following is from:  http://washingtonexaminer.com/sen.-tom-coburn-we-need-a-constitutional-convention-to-take-back-our-country/article/2534671.

Sen. Tom Coburn: We need a constitutional convention to take back our country

There are a lot of concerns today in our country, not any of them unsolvable, but they are nevertheless big and problematic.  If I were to assess where we are as a country today, I would say that the constitutional republic that we have is at risk for the very things that our founders and forefathers talked about:  The abandonment of constitutional principles, especially the enumerated powers, has created situations in which we find ourselves leaving a legacy to our children that I certainly can’t be proud of and I know most of you can’t be proud of.

Our unfunded liabilities right now are $126 trillion when you add them all up.  That includes the $17 trillion that we owe, plus the rest of the unfunded liabilities.  The total net worth of the United States, all the assets that the whole country has together, is $84 trillion.  So essentially the game is up.  And the problem is we don’t have any visionary leadership in our country, in either party, that will stand up and talk about what the real problems are.

We have undermined self-reliance in the name of being charitable.  We have abdicated personal responsibility in the name of being fair.  And we’re following in the footsteps of what every historian has told us about every constitutional republic — they don’t last and the reason they don’t last is because we concentrate power in the central governance and end up giving away freedom and creating fiscal policies that undermine the very economy that supports the growth and the vibrancy of our country.

I think these problems are all solvable.  The questions I ask privately and publicly are, with all these big problems, why are we not addressing them in the Congress?  And I hear often from Oklahomans about the fact that “you all need to work together.”  I have an observation on that.  We’re going to have an $800 billion deficit this year.  Congress approved that.  I’d say we are working together way too well.

Our biggest problem in my estimation is not our country and not our people, it’s the elitism that comes from the career politics that dominate our Congress and our country.  And I was asked today and I am asked this a lot, well, by a very sincere individual, “Well, what do we do about it?  Throw’em out?”

Well, “throw’em out” doesn’t work unless you replace them with people that are different.  Essentially, 70 percent of the Senate has never had a job outside of career politics.  So they are wonderful people, I mean I get along great with Dick Durbin.  I like him as an individual, but our philosophies are totally different.  He means well, as well as many of the other people that promote policies that I would consider will undermine our future liberties.

So, it doesn’t do any good to throw them all out, and I’ve been convinced in the last few weeks, I’ve read a book called “The Liberty Amendments.”  And I would just say that I used to have a great fear of constitutional conventions.  I have a great fear now of not having one.

Three-quarters of the states would have to approve anything that was approved through that, so I don’t think there’s a lot of danger to our republic from us taking back control from Washington, honoring the 10th Amendment, enhancing federalism and recreating a sense of personal responsibility and accountability.  Not only at the individual level but at the city level and at the state level.

I had a fire chief get upset with me today because I don’t see any role in the Constitution for us to be buying fire engines for states and cities.  The danger with that is you become addicted to the largess of the federal government that says its giving you something, but it’s actually stealing it from your children and grandchildren.

Editor’s note:  The preceding were Coburn’s opening remarks at an Aug. 23 town hall meeting in Oklahoma, as seen in the accompanying video.

Sen. Tom Coburn is a Republican from Oklahoma.