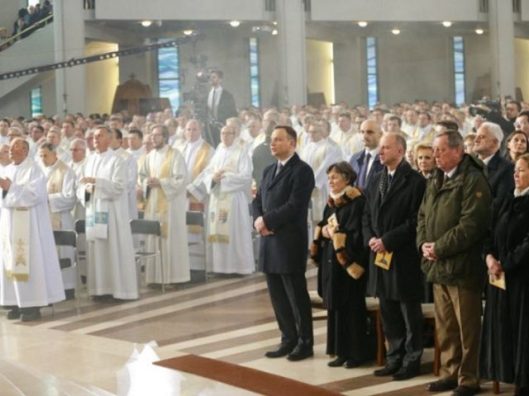 The Catholic Bishops of Poland together with President Andrzei Duda proclaimed Jesus Christ as King of Poland Saturday and called upon him to rule over their nation, its people, and their political leaders.

In a ceremony at the National Shrine of Divine Mercy in Krakow, the bishops commemorated the 1,050th anniversary of the Christianization of Poland by entrusting the nation to the kingship of Christ.

“Immortal King of Ages Lord Jesus Christ,” the bishops prayed together with the congregation, “We Poles stand before you to acknowledge your reign, surrender to your law, and entrust our homeland and the whole nation to you.”

“Humbly bowing our heads before you, King of the Universe, we acknowledge your dominion over the Polish nation, those living in the homeland and throughout the world,” they said.

The Catholic feast of Christ the King is celebrated on the last Sunday of the liturgical year, but the specific form of Saturday’s ceremony comes from divine revelations said to be received by Polish nurse Rosalia Zelkova claiming that Christ asked to be officially enthroned as King of the Polish nation.

During the enthronement ceremony, the clergy and the congregation asked Jesus forgiveness for their sins “and in particular for turning away from the holy faith, for lack of love for you and others.”

“We renounce the devil and all his works,” they said.

The congregation also asked divine assistance for their rulers, including President Duda.

“We entrust to you the Polish people and Polish leaders,” they said.  “Let them exercise their power fairly and in accordance with Your laws.”

“Rule us, Christ!  Reign in our homeland and reign in every nation — for the greater glory of the Most Holy Trinity and the salvation of mankind,” they said.