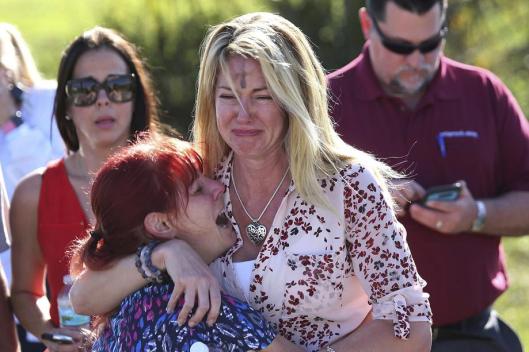 February 15, 2017:  This is a Facebook post of mine from the day following the Sutherland Springs, Texas church shooting. I am currently writing a post on my current thoughts of what CAN be done realistically, effectively and in a non-partisan or political manner. I will share that soon. Everyone has their own view of a solution, usually staunchly partisan, but NOW, more than ever, is the time to make public each of our REALISTIC solutions. I believe and pray that yesterday’s Parkland, Florida mass shooting IS the tipping point. It has to be, with the full participation of all American citizens’ voices, regardless of cultural or political differences. Let’s all come together. These senseless tragedies CAN be stopped as close to 100% as is humanly possible. We must actively advance civility.

November 6, 2017:  Here’s my take on the frightening and unacceptable rise in gun-related murders in America. Banning guns is not a real solution. Why? There are already half-a-billion guns out there. That is what I believe is the current estimate. What are authorities going to do? Will they go house-to-house confiscating those guns? I think not. Banning guns will not solve the problem of all the guns that are already out there that cannot be thoroughly confiscated. Automatic or semi-automatic weapons, maybe, which I would completely support, but even those, present owners would not give them up easily.

As far as improving background checks, the presently deceased gunman in the Texas shooting was dishonorably discharged and court-marshaled from the Air Force. His right to own a gun was taken away, yet he found a way to buy a weapon—four years in a row! He must have lied on his forms or found some other weasely way to purchase his four guns. A more thorough background check migh make it harder for people to buy guns, but I believe that where there is a will, there is a way. There are too many guns out there already that can be bought or stolen.

As far as mental health, the killer in the Texas mass killing reportedly sent threatening text messages to his mother-in-law—who attended the Baptist Church where the shooting took place, although, she wasn’t there at the time of the shooting. Why didn’t she report those texts to the authorities? Would the authorities have responded? Is it a current crime to send threatening texts? Maybe strengthening background checks would help. Would all gun-sellers take those strengthened checks seriously?

My wife, Jean, called the local police at least once in response to a former neighbor’s strange behavior. We spotted him, once, running on his property with camo pants on, stopping, quickly kneeling and aiming his rifle into the distance, running again, kneeling again and then aiming again. We live in the mountains where many people own guns and have large acreages to run around on, even to set up home shooting ranges. It’s not illegal here. Maybe in cities, but it’s not in many sparsely populated areas. The local police, here, almost laughed at us with our “see-then-tell” approach. They did visit our neighbor, but he wasn’t home, so they didn’t pursue our concerns other than watching his house on occasion. He hung “painted, death-masks” on two aspen trees that face our driveway as we drove down from our home for God’s sake! Again, he was on his property, so he wasn’t “breaking the law.” He reported me to the local police once when I turned the corner by my acreage, slamming on my brakes, and almost running into him and one of his two, frankly vicious, Tibetan Mastiffs as they walked along in the middle of the road. (Even the police were afraid of his dogs.) A deputy visited our house, though, questioning me, and warning ME to drive more safely. So much for “see-then-tell!”

As far as those who seek mental health assistance; counselors, therapists and psychiatrists are bound to keep their records sealed to protect privacy. Perhaps a legal warrant for those records would supply those records in the case of someone who appears to them to be a threat to others, or especially capable of a mass shooting, but even so, would that violate privacy rights and also result in dissuading many others, who are ill, from seeking out help that might prevent them from hurting others? I think so.

Lastly, what of family members, friends or others that have more defined “red-lights” as to their strange behavior, or stained backgrounds? Constitutional rights are not that easy to be taken away in an exceptional and valuable, FREE country. It’s not easy to declare a family member insane, for example, because there are laws that protect that person from being taken advantage of by family members that want to lock them away to take their inheritance or for some other shady reason. It takes going to court, spending lots of money on attorneys, and fighting, often with extremely heavy hearts, to prove that person unable to sanely care for themselves, and then to lock them away in an institution. A snap-of-a-finger? Again, I think not.

Truly, mass shootings, or shootings at all, are a frustrating and senseless, complex problem to solve. What we need are real and effective solutions toward solving these heartbreaking crimes—other than gun control or strengthening background checks. In the case of the Texas shooter, he was stopped from killing even more churchgoers by a private citizen with his own legally-owned gun. Something to seriously consider.