A Christian Answer to the Age of Terror

Pope Benedict’s ‘spiritual son’ on the future of a Europe unmoored from its religious roots.

Tourists throng the plaza in front of St. Stephen’s Cathedral, at the heart of the Austrian capital.  They chat in reverent tones while struggling to fit the cruciform behemoth into the backgrounds of their selfies.  Mandarin, Persian and Turkish catch my ear as I make my way through the crowd.  The scene makes me wonder:  What does a 12th-century Gothic cathedral dedicated to the first Christian martyr mean to a visitor from, say, Shanghai?

For Vienna’s archbishop the answer is clear.  The tourists, Cardinal Christoph Schönborn thinks, appreciate what St. Stephen’s represents better than many Europeans do, namely “that this Continent has Christian roots.”  When his staff meets at the archdiocesan complex next door to the cathedral, they use a room that overlooks the teeming plaza.  The sight is a good reminder of the universal call of the Catholic Church—and of the real people who are its intended recipients.

Anxiety roils that human welter these days.  In Europe the Islamist threat, the problem of Muslim integration and the return of blood-and-soil nationalism top the litany of Western gloom.  Cardinal Schönborn had been embroiled in these worldly controversies when we sat down for an interview recently. 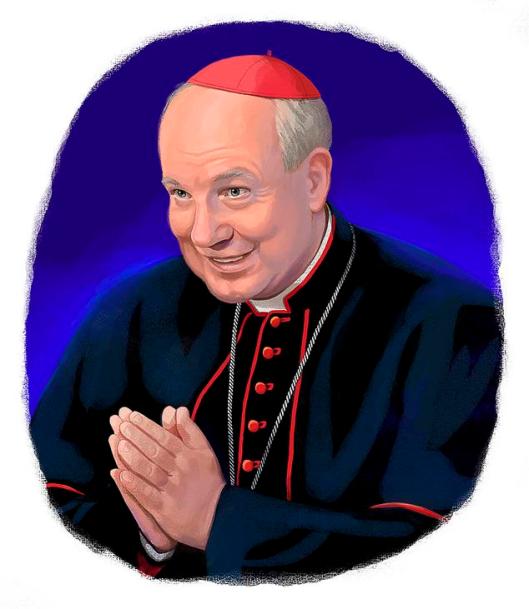 “Will there be a third Islamic attempt to conquer Europe?” he had asked in a Sept. 11 homily at St. Stephen’s that made headlines across the Continent.  “Many Muslims think this and wish this and say that Europe is at its end.”

The left was quick to charge him with thought crimes, while those of a more populist bent claimed the cardinal as an anti-immigration warrior after their own hearts.  It didn’t escape notice that he had delivered the homily at a Mass for the Feast of the Holy Name of Mary, marking the 333rd anniversary of the Habsburg triumph over the Ottomans at the Battle of Vienna.

His message was lost amid the rancor.  It wasn’t mainly aimed at Muslims.  “I can fully understand Muslim believers—authentic believers, whom I profoundly respect in their belief—who see evident signs of decadence in Europe,” he tells me.  “They think that Islam will be a good thing for Europe, to bring Europe on a better path of morality, of faith in God.  So for me, the threat is not the believing Muslims.”

The physical insecurity and social incohesion created by ill-assimilated Muslim communities are there, to be sure.  But these things are byproducts of the West’s own existential confusion.  “The real challenge is:  What does it mean for the Christian roots of Europe?” asks the cardinal.  Christianity, he says, is a “missionary religion by its founder.  Jesus said, Go and make all nations my disciples, teach them what I taught you, baptize them.  And a similar thing is true for Islam.”

Only many in the West have relinquished their own inheritance, let alone any desire to share it.  Meanwhile, Muslims remain devout and are growing more so.  The clash between a secularized, doubt-ridden West and a missionary Islam is Europe’s cultural crisis in a nutshell.  “For Muslims in Europe,” Cardinal Schönborn says, the question is whether they can learn to “respect the other’s conscience,” as Christendom did across painful centuries.

As for Christians:  “Do we believe that the Gospel teaching of Jesus is really what helps people lead a good life, for a good society, for paths to eternal life, which is finally the final question and the purpose of life?”  Early Christianity, he points out, didn’t expand through arms or proselytism “but through attraction—it was attractive to become a Christian.”  A West imbued with similar metaphysical confidence today needn’t “fear other people and other religions.”

When the West honors its Judeo-Christian origins it will also recover the truth about itself.  “The whole set of human rights,” says the cardinal, “has profound Christian roots.”  Man’s inherent dignity doesn’t derive from this or that European Union document but from a vision of the human form as created in the image of the Almighty.  The task for Christianity, and the Roman Catholic Church especially, is to bring these “runaway children” home.

A spiritually unmoored West is vulnerable to its own demons, chief among them exclusionary nationalism and various ideologies that treat human beings as means to an end.  Threats to the dignity of life on the Continent, such as the relentless expansion of euthanasia, and the resurgence of the “idolatry of the nation”—nationalism pushed to extremes—suggest that “the demons of Europe are still around,” the cardinal says.

He points to a copy of the 2010 book “Bloodlands” sitting on his coffee table.  Yale historian Timothy Snyder meticulously recounts the horrors visited upon Eastern Europe under Hitler and Stalin.  “That’s only 75 years ago,” says Cardinal Schönborn, “not so long ago.”

Christoph Schönborn was born in that age of blood, in 1945, to a Bohemian princely house in what is now the Czech Republic.  At war’s end the Czechoslovak government began persecuting German speakers in its territory, forcing him and his mother to escape across the border to Austria when the future cardinal was still an infant.

His parents, a count and a baroness, weren’t particularly religious.  But he came to Catholicism thanks to “a real faith experience”—a mystical boyhood encounter with Jesus—“and the help of good priests.”  He joined the Dominicans at age 18.  “I went through all the revolutionary questions of the 1968 generation,” he recalls.  “Then I discovered my theological homelands.”

He read the early Christian masters voraciously and studied under a German theologian named Joseph Ratzinger, the future Pope Benedict XVI.  He went on to serve as principal drafter of the 1992 Catechism of the Catholic Church, the first comprehensive summary of the faith in four centuries, before being named archbishop of Vienna in 1995 and a prince of the church three years later.

Vatican observers have described Cardinal Schönborn as Pope Benedict XVI’s spiritual son.  Yet since Benedict resigned the papacy in 2013, Cardinal Schönborn has emerged as one of Pope Francis’ defenders against traditionalists who argue that the Argentine Jesuit lacks the moral and theological clarity of his recent predecessors.

Pope Francis’ papacy reflects a world of mind-boggling complexity and diversity.  “Pope John Paul II had this tremendous capacity—the clearness of his ‘No!’ to certain things,” says the cardinal.  “He had learned under the Nazi terror in his own country, and Communist dictatorship, exactly when a clear ‘No!’ had to be said.”

Pope Francis, by contrast, “is the first Pope from outside of Europe.  He represents in his history the Latin American continent, where more than one-third of the world’s Catholics live, and the challenges there are very different.”  And yet the cardinal finds more continuity in Pope Francis’ teaching than the pontiff’s critics might concede.

Differences in tone and accent notwithstanding, Cardinal Schönborn sees the current pope’s communitarian economic instincts as a continuation of longstanding church social teaching.  Pope John Paul II, he says, had his own misgivings about unfettered markets.

The Pole opposed Communism because he saw it “as a perversion of the elementary laws of economics and of human conviviality.”  Even so, John Paul II worried about the excesses of “radical liberalism and radical capitalism” without “social boundaries.”  It’s up to the secular world to decide where to draw the boundaries—and who should draw them.

Pope Francis also emphasizes “a church for the poor”—in the material and Gospel sense.  Hence why he makes a point of visiting ex-prostitutes, prisoners and migrants.  The pope’s gestures “are very spontaneous but very conscious,” says the cardinal.  He has yet to appoint a cardinal from Venice, but he has elevated them from Bangladesh, Burma, Papua New Guinea and Haiti.  “This is a language that is not politically correct, by church standards, but politically clear.”  Francis is reminding the Vatican that only a quarter of the world’s Catholics now live in Europe.

Is there a risk that the pope’s shifts could upturn doctrinal pillars, such as church teaching on divorce?  Some pastors have interpreted Francis’ apostolic exhortation Amoris laetitia (“The Joy of Love”), published this spring, to authorize case-by-case exceptions to the rule against divorced-and-remarried Catholics’ taking Communion.  The document is vague, and the pope has so far declined to offer a black-letter ruling.

“This a very Catholic balance,” says Cardinal Schönborn.  “It’s often said that Catholics don’t say ‘either/or’ but ‘one thing as well as the other.’  ” As the cardinal interprets it, Amoris laetitia says, “Let’s take families as they are.  God is at work not with ideas but with real people.”

Even as they are called to uphold absolute moral standards, Christians must recognize that “from the very beginning the drama of humanity is that we are lapsed, that we are broken, that we are wounded by ourselves and by others.”  Still, it’s hard to blame Catholics who fear the erosion of the church’s capacity to say “No” to the ways of the world, notwithstanding such clarifications.  A few words of orthodox reassurance from the pontiff would help.

Cardinal Schönborn says of the pope, “Believe me, he’s Catholic, genuinely Catholic.”  Pope Francis hasn’t conceded an inch on the church’s pro-life stance, and in October he assailed postmodernist gender theories that pretend that human sexuality is a social construct and therefore infinitely malleable to personal and political whimsy.  Such theories, Pope Francis said, are part of a “global war” aimed at destroying marriage and the traditional family.

“I can only say to those Catholics worried that the pope will stray from sound doctrine:  Don’t be afraid,” says the cardinal.  “He will never teach something that is not sound doctrine.  But he wants us to see whether we have the mind of Christ”—that is, to have the courage to encounter brokenness, our own and others’, to meet people as they are.

“My own experience is that whenever you overcome your own laziness and engage other people, you are encountering Jesus,” the cardinal says.  “It’s a doorway to Jesus.”  Behind the door is an invitation to friendship.  Cardinal Schönborn’s motto is Jesus’ saying, recounted in St. John’s Gospel, V os autem dixi amicos—I have called you friends.

“And that’s a reality,” he says.  “I’m certainly not His best friend, because I’m lousy and negligent and not always faithful to this marvelous friendship.  But I know that He is faithful.”

Mr. Ahmari is a Journal editorial writer based in London.