U.S. News
Colorado ‘Lab Rat’ Campaign Warns Teens of Pot Use
Use of Cages Has Been Criticized by the State’s Legal Marijuana Industry; Mocked by Some Young People 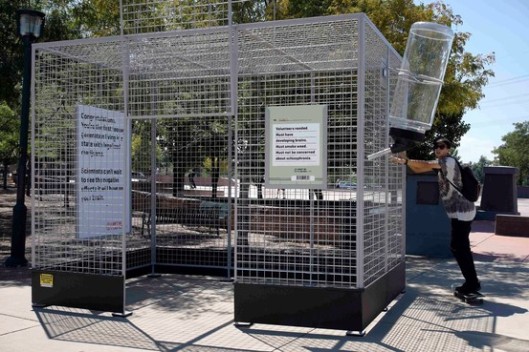 A skateboarder stops to examine a human-sized cage installed in August at the Denver Skate Park in Denver as part of Colorado’s ‘Don’t Be A Lab Rat’ campaign to discourage youth marijuana use.  Reuters

DENVER—In a state where legal marijuana seemingly is everywhere, Colorado public health officials have taken an unusual approach to warning teenagers about the dangers of the drug:  likening young pot smokers to laboratory animals.

Concerned about a potential jump in youth marijuana use now that the state has legalized the drug for adults, Colorado is displaying three human-size cages in various communities with signs that bear provocative messages about the drug’s pitfalls, as part of its “Don’t Be A Lab Rat” campaign.

“Does Marijuana really cause schizophrenia in teenagers?  Smoke and find out,” one sign says.  “Subjects needed.  Must be a teenager.  Must smoke weed.  Must have 8 IQ points to spare,” reads another.

But the public-awareness campaign, which was launched in August and includes television commercials, may not be having the impact the state intended.  The cages, which were first set up in Denver, have been criticized by Colorado’s legal pot industry and mocked by some young people, who have dismissed it as a scare tactic.

U.S. Rep. Jared Polis, a Democrat from Boulder, even took issue with the cages, telling the Denver Post he thought the campaign was “bizarre.”

“It’s reefer madness all over again.  Kids are smarter than this,” said Wanda James, a local marijuana activist, who was part of the state task force that helped implement Colorado’s new regulations for the drug.  Ms. James was referencing the 1930s propaganda film that famously exaggerated the dangers of marijuana.

Colorado became the first state in the country to allow the sale of pot for purely recreational use in January, after voters in 2012 passed a ballot measure to legalize it for those 21 and over.  Washington, the only other state to legalize recreational marijuana, launched its pot industry in July.

Larry Wolk, chief medical officer and executive director of the Colorado Department of Public Health and Environment, said the campaign was intended to start a conversation about marijuana use by young people and convey the message that the drug can be harmful.  State health officials said they were concerned by studies showing that pot can lead to depression and impair cognitive functioning.

“Whether you hate it or love it, or are somewhere in between, at least you have people talking about it,” said Dr. Wolk of the campaign, which was funded with nearly $2 million in grants from the state attorney general’s office, foundations and additional money from the city and county of Denver.

In addition to the lab-rat campaign, the state legislature has allocated $5.68 million from marijuana sales taxes this fiscal year for the department to engage in a more sweeping prevention and education effort.

Mike Sukle, whose Denver advertising agency designed the lab-rat campaign, said it is a “monumental task” to get young people to avoid marijuana, given the excitement over legalization.

His firm conducted focus groups with young Coloradans, in an effort to figure out what messages would resonate.  They settled on the 8-by-12-foot cages, which stand about 9 feet tall and have a giant water bottle fashioned to them.

“If we had launched a campaign and didn’t get any reaction to it, we wouldn’t have been doing our jobs,” he said, noting that the plan is to move the cages around Colorado.  One cage is scheduled to be set up in Grand Junction on Monday.

At least one city doesn’t want them.  Boulder officials declined an offer from the state to erect a cage, saying that while the city supported marijuana education, community members didn’t think the structures were the appropriate way to communicate that message.  The city’s school district also said it wasn’t interested.

“There is some communication in the campaign about possible medical effects, and the reality is that there is a lot of research to be done,” said Bruce Messinger, Boulder Valley School District superintendent.  “We like to deal with what we know to be true.”

At a skate park near downtown Denver, where the smell of marijuana hung in the air recently, young pot smokers laughed when discussing one of the cages that had until recently stood on the corner.

“They’re pretty wack,” said Colt Holiman, 27 years old, saying he and other young people who frequented the park took issue with the warnings about detrimental health effects.  “But that water bottle on the cage?  That would be awesome to have.”

Write to Dan Frosch at dan.frosch@wsj.com