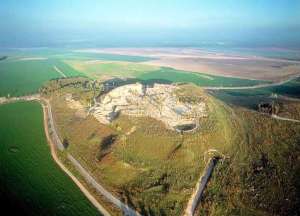 I wrote this college essay, “Ruins of Megiddo, Ruins of Mortal Power,” in March 1990 at the age of thirty-five.  It was based on my 1985 and 1988 travels to Israel, specifically to tel Megiddo.  I’ve updated it a bit to reflect present-day relevance.

Now an archaeological site, it’s name in Hebrew is har Magedon, which translates to “mountain of Megiddo.”  Har Magedon is known most universally as Armageddon.

A tel is a mound of earth that has formed over the ruins of an ancient city, or over the ruins of many cities, each on top of the other.  The cities within tel Megiddo were destroyed and rebuilt twenty times before being covered for ages by the wind and earth.  Nearby this tel, in the Valley of Jezreel, the Israeli Air Force sends fighter planes into the skies over the ancient ruins.  It has been feared since the time of the biblical prophets that har Magedon (Armageddon) will be the site of our world’s final destruction.

The fields of the valley of Jezreel, among the northern hills of Galilee, the southern hills of Samaria, the eastern Jordan Valley and the western Mediterranean Sea have the appearance of a chessboard.  Squared fields of early emerald-green wheat alternate with squares of reddish-brown, iron-rich soil.  Too much blood has darkened the brilliance of these colors.  Throughout 3458 years of recorded history, beginning with the siege of 1468 B.C. by Egypt’s Pharoah Thutmose III, mortal powers have clashed on this fertile battlefield that lies strategically at the crossroads of the three continents of Africa, Asia and Europe.  This battlefield is known universally as Armageddon (har Magedon in Hebrew, meaning “mountain of Megiddo”).

This tel bears more of a resemblance to a grass-covered mound of earth than to a mountain.  The walled city of Megiddo, first settled about 3500 B.C., destroyed and rebuilt twenty times and finally abandoned in 332 B.C., lies in ruin within the mound.  Tel Megiddo is like a scab over a chronic wound in the earth’s surface persistently forming from the blowing dust, the creeping grass and time.  Archaeologists opened the wound in 1905, again in 1925, three times in the 1960’s and then again in 1971.  They probed and analyzed the exposed contents, recorded and published their findings and expanded scientific and historical knowledge toward a fuller understanding of the people who once inhabited the varied levels of life and commerce.  For those who have ever walked among the ruins, there are other dimensions that rise like spirits to one’s mind.  Manifest in the ruins of Megiddo are three characteristics of the mortal power that has passed and continues to pass through human hands.  Power is ephemeral, like a daylily whose colorful flowers bloom with dawn and fade at sunset.  It survives only until a greater power blooms and conquers.  Power is segretative, dividing people into classes.  Power is prodigal, exploiting the class-imposed people.  It’s destructive and wasteful of human life.

Whatever magnitude of strength a ruling power attained within Megiddo, a stronger power always developed, challenged the rule and seized control.  The twenty sandwiched layers of ruins, containing limestone blocks cut from nearby quarries, gold jewelry, carved ivory figurines and fragments of oven-fired clay pottery attest to the appearance of twenty adversaries, each of greater strength than the previous.  The space between the twentieth and the first layers has a height of only fifty feet.  Pottery fragments found in the space and carbon-dated have revealed that the settlement of Megiddo began with Chalcolithic caves of 4000 – 3000 B.C. and ended with the Persian abandonment of the site in 332 B.C.  Since then, control of power over Megiddo and the valley of Jezreel has successively passed from the Persians to the Greeks, the Romans, the Arabs, the Crusaders, the Turks, the British and currently the Israelis.

Systems of power within Megiddo divided the people by class and privilege.  An earthen path ascends from the lower fields to the gate complex continuing upwards to the palace area, the highest level of the mound.  The mixture of pottery fragments with common field stones throughout the lower fields indicates that most of the ancient people of Megiddo had lived outside of the walls.  The field stones along with goat skins had formed their shelters.  Artifacts of monetary value were only found higher up the path and beyond the gate.  Collections of gold jewelry and carved ivories were discovered within the walls and near the gate.  A woman’s purse dating to the time of the ruins was found in a hollow portion of the outer wall.  Composed of leather, the purse contained a mirror, a comb, a mascara brush, two colors of mascara and charm amulets.  At the highest level of the inner-city are massive limestone blocks outlining the 92-foot-by-69-foot foundation of the palace area and governor’s residence.  Skirting the outline are the remains of the grain silo and water system, both within walking distance of the palace.  During days of intense heat, the cool Mediterranean breezes pleasure best at this height.

Struggle for daily existence and fear of invasion were the fruits of power within Megiddo.  From the vantage point of the palace area, looking down, the uphill climb from the lower fields to the grain silo and water system is observable.  The ruins of the granary consist of a 36-foot-diameter circular wall of stones descending into the mound about twenty-three feet along with two stone staircases following the circular form.  One descends to the bottom (for depositing the grain) and the other ascends to the top (for returning to the fields).  The ruins of the water system include a 230-foot underground tunnel extending into the city from a natural spring and a 98-foot descending shaft joining the tunnel near the inside of the west wall.  A staircase leads halfway down the shaft.  From here, the workers who were in need of water had to lower their urns by rope and then pull the full urns up.  During sieges, the granary and water system were not accessible to the people who lived outside of the walls and the secure gates.  Sieges have been known to last for as long as three years.  The pottery fragments that are scattered throughout the fields are all that remain of the people who lived outside of the walls.  They were always the first to die, left without grain or water and exposed to massacre, rape and slavery by the invading army.  Eventually, the blood of the elite inside of the walls was also spent in the soil of the valley of Jezreel as the new power mercilessly secured its control.

In the thousands of years that have passed, only technology seems to have changed in the pursuit of mortal power.  Today, in the skies overhead, U.S. designed jet fighters from the Israeli Air Force soar directly over Megiddo, banking to the right above the ruins and gliding downward to the Air Force Base in the valley.  The deafening roar of the low-flying jets drowns out all other sounds.  Heat-seeking missiles are clearly visible under-wing, like poised arrows.  The ruins tremble during the arrogant, earth-shaking fly-by’s.  The transience of the jet fighters piercing into and out of one’s range of senses mirrors the nature of the power that has passed among the many rulers of Megiddo.  The lucrative science of U.S., Soviet and Chinese weaponry renews mortal power while madmen like Assad and Ahmedinejad goad us ever closer to Armageddon.

Brubacher, Gordon.  “Seven Generalizations About a Tel,”  “The Daughters of Megiddo” and “Guided Tour of the Ruins of Megiddo.”  Lectures tape-recorded by myself at Megiddo, Israel:  March 23, 1988.

For an outstanding historical fiction of how civilizations rise and fall within a single site, eventually falling and becoming a tel, I highly recommend:  Michener, James.  The Source.  New York:  Random House, 1965.